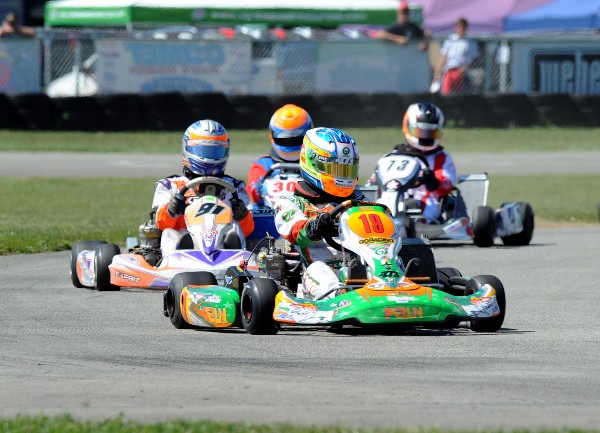 Kyle Kalish finished off his rookie senior season by winning the inaugural United States Pro Kart Series Leopard Pro National Championship with an astonishing victory in the final race of the season. Held at the Pittsburgh International Race Complex, Kyle came back from 7th at the start to take the lead with 2 laps to go and secure his first senior National Championship.

Coming off a big win at the annual Komet Throwdown, Kyle looked to keep his momentum into the season finale and compete for the race win. Aboard his Merlin LM30/ Franklin Motorsports powered Parilla Leopard, he was able to once again prove he deserved to be on the list of top TAG drivers in the country. After a long day of practice on Friday, Kyle would qualify 8th for Saturday’s two heats. After two consistent heat races, he would be slotted into another 8th place starting position for the day’s final. Doing his best to stay out of trouble, he was able to finish 7th in Saturday’s final. “While we didn’t have the day we were hoping for, it was still a decent day for points.” Kyle stated, “We struggled on the new YLC tires on Saturday and we were hoping for a better result, but we still felt confident that we could fight for the podium on Sunday.

Sunday was another day for Kyle. After qualifying 2nd , he would be slotted into the Kartsport Fast Five Shootout, a one lap qualifying shootout for the top 5 starting positions. Kyle would place 4th in the shootout. With the USPKS crew deciding to only race a prefinal and final on Sunday so that they could have the banquet later that day at the track, Kyle knew how important it would be to have a solid finish in the prefinal in order to be able to fight for the win in the final. Starting 4th, he would have to work through slight rain for a large portion of the race. He made the most of the conditions and moved up to 2nd place with a late race pass. Starting the final on the outside pole, Kyle got shuffled back to 7th. Not giving up, he was able to quickly move back up the rankings into 2nd by lap 8. With race leader Mark Dismore Jr. already out to more than a 2 second lead by the time Kyle was into 2nd, it was going to be a hard race for him to win. He never stopped moving forward though, gaining about a tenth a lap on the race leader. With two laps to go Kyle made a late move on Dismore going into turn one. From there he would pull away to almost a 7 tenths lead at the finish. “It will go down as one of the greatest drives of my career for sure. Once I got into 2nd, I knew I could win if I managed my tires right and kept pushing. I had an amazing kart and it was a huge part of my success today and this season. There was no better way to win the championship than with a victory like this. I can’t thank everyone who supported me this season enough, and I can’t wait to see what the future brings!”

With Kyle’s finishes this weekend, he was able to secure his 4th National Championship by 285 points. With this championship, Kyle has now won a National Championship in all levels: Sportsman, Junior, and Senior. And even though the United States Pro Kart Series season is over, he is still working on some possible one-off appearances to finish off the season. “No matter what we end up doing the rest of the season, I am still so proud of everything my team and I have accomplished this year.” Kalish comments, “We have had such an amazing year, and I don’t know how it could have gotten any better than this! I would like to thank my family, especially my dad, Jamie and George Sieracki at Franklin Motorsports for the amazing power plants and Merlin chassis, GO Designs for the amazing website, and Minus273.biz for all the press and support they gave me. Each of these supporters played a huge role in my success this year, and I cannot thank them enough! I look forward to the rest of the year and hopefully have some big plans for next season.”

For more information about Kyle or to inquire about sponsorship opportunities, please visit his website at http://www.kylekalish.com, his Facebook page at https://www.facebook.com/KalishRacing, or e-mail kyle@kylekalish.com