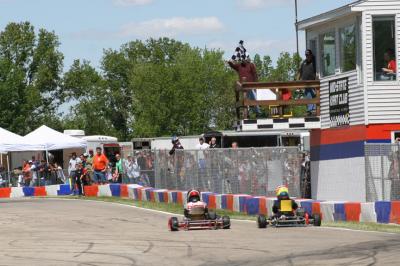 Since I wouldn’t have time to do the whole Route66 Series, we figured Springfield would be our last stop.

Most of the parents don’t seem to like Midstate, but I think the tracks a blast. I would take Pole, Prefinal and Final in HPV with really no pressure from anyone. Yamaha would come down to the last lap with Jordan Laukaitis leading, running the inside line down the long straight. I would attempt an almost impossible outside pass thru the Monza, coming up .010 of a second short. Still I had a blast, was sad that I wouldn’t be able to defend my 2007 Championship.